skip to main | skip to sidebar

When Chain Stores Move to a Better Neighborhood

Posted by Geowoman at 4:47 PM No comments:

Labels: Eisenhauer and I-35

Dry cleaners are notorious areas of toxic waste.  The chemicals (once used, hopefully not being used by modern era cleaners) are probably still lingering at this site, years later. 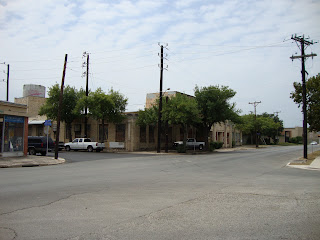 Located at the corner of East Elmira and West Josephine, the cleaners is located 1 block from the San Antonio River and across the street from an elementary school and has been vacant for at least 2 years.

Posted by Geowoman at 6:24 PM No comments:

There was a time between 1989 and 1992, I was pretty much running around in the streets, seeking "fun" (mostly dangerous and illegal). Looking back on it, now, I steal the term, "The Wilderness Years" from writer, chef, tv personality, Anthony Bourdain. I could not come up with a better term on my own. Part of that history is Taco Land and its owner, Ram. Once upon a time, Austin, Texas was not The Hipster Douchebag center of North America. Me and the rest of my "punk" friends had to go up the road to San Antonio to see big shows. No trip to S.A. was complete without a trip to Taco Land. Fuzzy memories: Ram was a kind man, welcoming us into his little corner of paradise. Ram was gunned down June 24, 2005, during a robbery. Two of his other long employees were shot during the robbery, his doorman, Gypsy Doug was also murdered that night also.

Here's what is left: 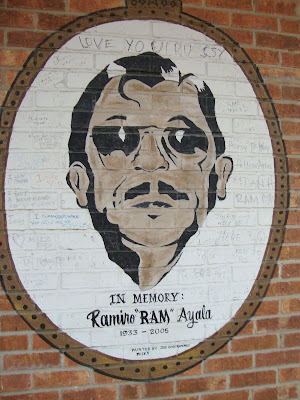 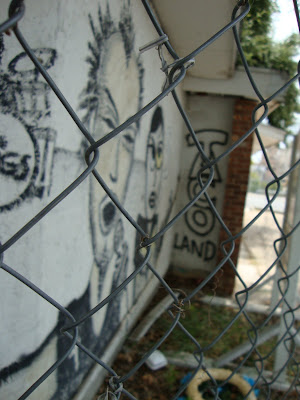 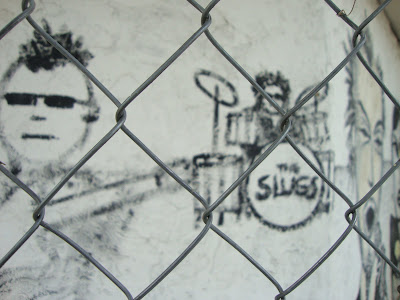 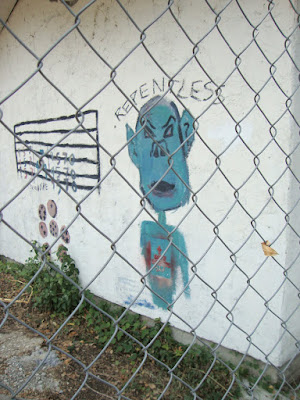 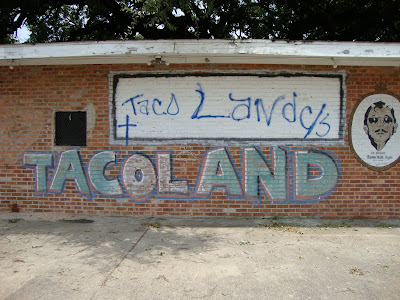 What do you do with this space? It's a historical space (god only knows how many bands played here), it is also the scene of a double murder.

It is also on the fringe of the San Antonio River Museum Reach. 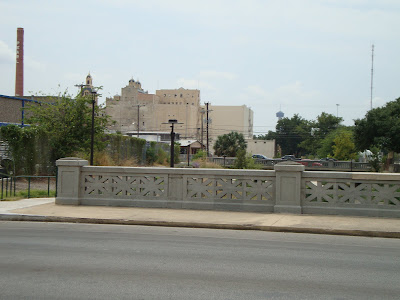 The empty Taco Land looking over The Pearl redevelopment at the Josephine Street bridge.

Here's some outside links:

Posted by Geowoman at 4:29 PM No comments:

Okay, at least once a week, for two years I have been driving past this building: 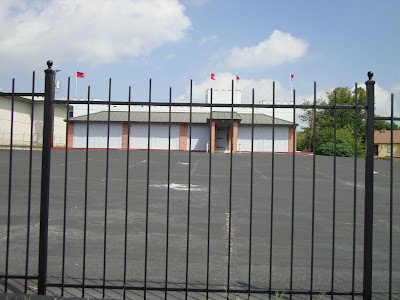 It's a castle, in the middle of Austin Highway! 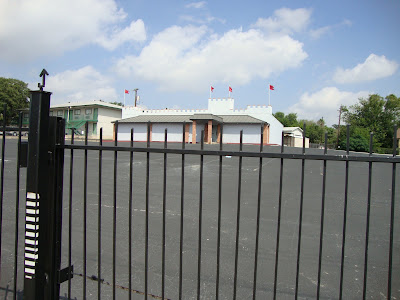 With a super cool train in the front! It's NOT a train, it's a magic latern! 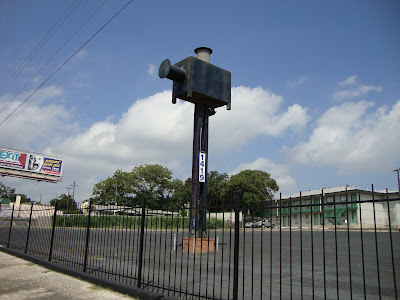 It's practically a fortress. 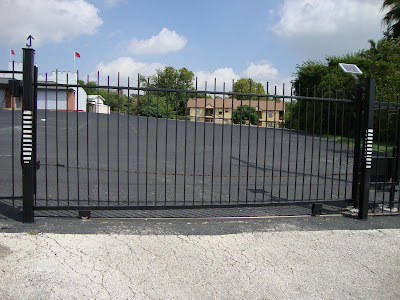 After coming out to the site on two different occasions to take pictures, I finally notice this sign: 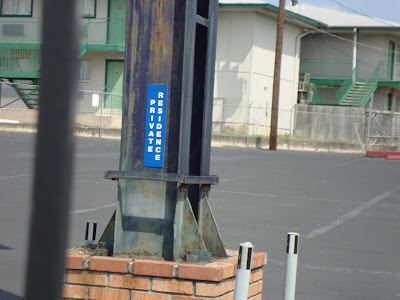 Interesting, it's a castle with a train out front, with a serious security fence and with gargoyles at the front door. What in the hell is this place? 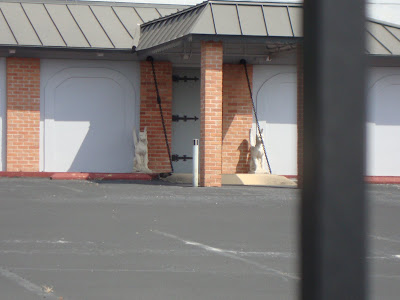 One of the reasons I started this blog was because there's a story behind every building, sturcture or lack there of. And this place at 1419 Austin Highway has a super cool one.
It's owned by a man named Jack Judson and inside is the Magic Latern Castle Museum. Way back in the day, movie projectors were called Magic Laterns. Here is the link:
http://www.magiclanterns.org/
Mr. Judson also has a nature trail (that's pretty popular with the birding set), here's that link:
http://www.go-texas.net/Jack-Judson-Nature-Trails/
I'm going to make it a point to see if I can make an appointment to see the museum really soon.

Posted by Geowoman at 1:53 PM No comments:

I have no idea why this restaurant failed. 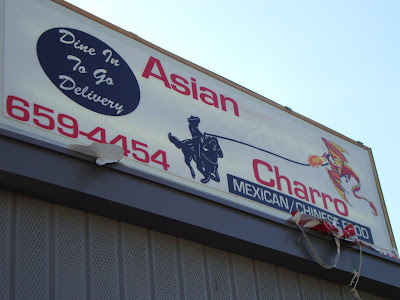 Ah, who the hell would not want Mexican/Chinese food? Seriously, the possibilities are endless: Mexican Fried Rice, Kung-Pow Burrito, Deep Fried Won Tons filled with Refried Beans. Mmmmm, I regret never having dined here. However, the sign is killer: a vaquero lassoing a dragon? It's a tat waiting to happen!

Posted by Geowoman at 3:09 PM No comments: 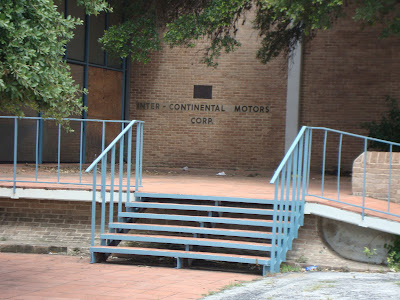 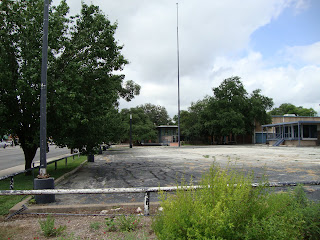 According to the Bexar County Appraisal District website (http://www.bcad.org/), the property was purchased in 2000 by a real estate agency. They seem to be sitting on this rather large (1.1205 acres or 48810 square feet) property, because there are no "For Sale" signs to be seen.
A few links for the history of the property:
The Samba has a few cool pics of the dealership in its heyday:
http://www.thesamba.com/vw/archives/info/dealers/intercontinentalmotorscorp_sanantonio_tx.php
Also, dealer Rod East (yes, that is his name) got his start at Inter-Continental:
http://www.rodeastvw.com/MiscPage_4
A shot of the back of the building, with a travel trailer sitting on the property. Note how large the trees are, indicating how old the property is. 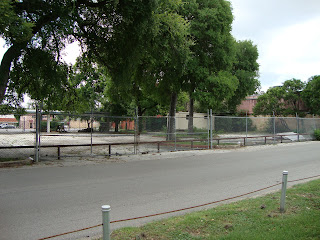 Here is a shot of the old showroom. I guess one of the owners of the real estate company needed a place to stash their old Dodge: 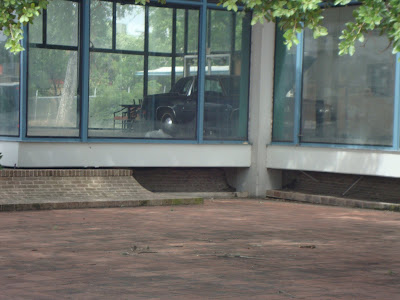 One last note: notice all of the brickwork, you don't see that kind of thing in modern car dealerships. This was a showplace for Volkswagens (and at one point Porsches), and now it's another empty space lacking purpose or meaning.
Posted by Geowoman at 5:17 PM No comments: